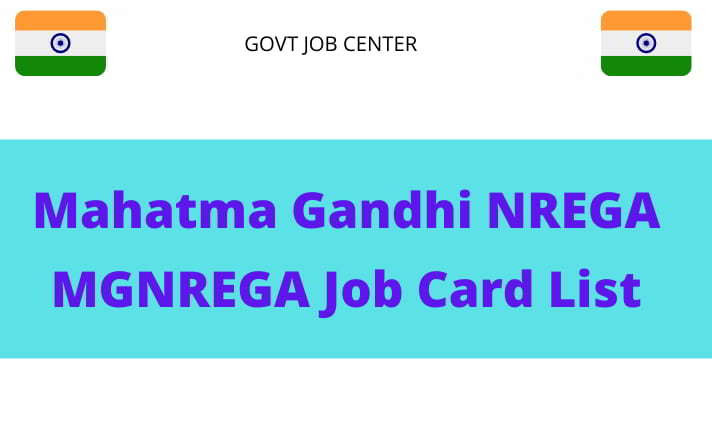 The full name of NREGA is National Rural Employment Guarantee Act. But at present, it has been renamed MGNREGA from NREGA. The name was changed on 2 October 2009. Whose full name is Mahatma Gandhi National Rural Employment Guarantee Act (MGNREGA)? Most of the population in India resides in rural areas, rural areas do not get employment, so the rural population is migrating to the cities for employment Has decided to provide. This has been made possible only through the MGNREGA scheme.

The government operates many government schemes to improve the economic status and better living of the poor families of the country. One of this scheme is Mahatma Gandhi National Rural Employment Guarantee Act (MGNREGA) scheme. This scheme, operated at the gram panchayat level in all the states of the country, is a very big scheme of the Government of India. But most people do not know much about it. So here we are providing complete information about it.

Mahatma Gandhi NREGA scheme is the only scheme in the world which guarantees 100 days of employment. For the operation of this scheme, the Central Government had allocated Rs 40,100 crore in the financial year 2010-11. Poor and unemployed families in the country are taking advantage of this scheme for their livelihood. People of such weak income groups are given employment in their own gram panchayat, due to this the problem of migration has also been prevented to a great extent.

The objective of the Mahatma Gandhi NREGA Scheme

Various works are done under this scheme, out of which the main work is as follows.

Any such act is notified by the Central Government in consultation with the State Governments.

What is the Mahatma Gandhi NREGA Or NREGA job card?

The Mahatma Gandhi NREGA or NREGA job card is a key document issued to the beneficiary and contains the job description. This card contains the details of the beneficiary such as name, father/husband’s name, address, and job card number. Beneficiaries are given job cards to make the Mahatma Gandhi National Rural Employment Guarantee Act (MGNREGA) transparent and to avoid any kind of fraud. This card entitles you to 100 days of employment.

What is MGNREGA Wages?

Many will also wonder how much money is available in MNREGA for 1 day? It varies from state to state. The table below shows the wages of MNREGA.

How many days of employment are available in MNREGA?

Under the Mahatma Gandhi National Rural Employment Guarantee Act, 100 days of employment guarantee is provided to the job cardholder.

How to take advantage of MGNREGA?

To take advantage of the MNREGA project, first register for a job card. After that, you will be given a job card within 15 days. After receiving the job card you will get 100 days employment guarantee. Now you can also work on the work done in your gram panchayat under MNREGA. Your job description will be recorded on your job card. The wages will then be credited directly to your bank account.